A lot has happened since I posted anything. Sara succumbed to pancreatic cancer on 24 Sept 21. My life has been a giant track meet of trying to get everything arranged, taken care of, and what not since then. The ability to think well and deeply has been intermittent at best (and that's being charitable).

She was interred in a small church ceremony in Lexington KY with her parents in December 21. About 1/3 of her ashes returned home with me for the memorial I describe below.

I arranged a dedication for a tree she planted in our yard, a plaque, and a bench that lines up with the sunrise on her date of birth and the day she died (depending on if you sit on the north or south ends of it). The rest of her remains are buried there. Rosalind and Joe were good enough to come for the dedication (on her birthday, April 13th) and Joe stayed for nearly a week so we could clean out the tool part of the basement so the weight room could take over both parts to allow more open space. The resulting floor and wall painting and brick sealing effort took about a month.

Now, it appears that our dog, Samantha aka Sam, a 14-year-old border collie is beginning the last stages of passing. She will be missed. She was the best dog I've ever had. 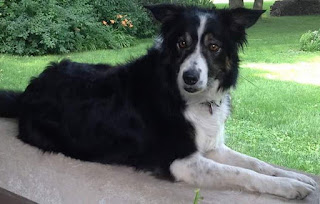 Sam
Work has revolved around getting Valley of Tears (BCS) tested and ready for release, No Turning Back (LoB on the Wilderness) the same... but with the added effort to generate the LoB v3.0 rules (while completely backward compatible, they endeavor to clean up some rough spots). At the same time, getting going on Ardennes II (SCS, remaking the 1993 version), as well as laying the ground work on the next BCS game covering the Kalach bridgehead on the road to Stalingrad in the summer of 1942.
Lastly, I've decided to make a page on the site dedicated to the ACM game I made that we played non-stop for fun during the late 90's. It's an air combat game played with miniatures using an excel spreadsheet for each a/c. It will be free of charge but with a tip jar that will, I hope, allow you to recognize just what went into that design. More on that as it gets assembled and loaded.
Dean