With apologies to Perry A, still no luck in posting responses to my own Blog. (You wouldn't think this would be at all difficult... but nooooooo.)

This time it actually allowed me to use my Google account for posting (that wasn't an option before). "Score," I'm thinking, "this will do it, thank you Perry!" and proceeded to write up a nice reply.

Then I hit submit.

And nothing happened... the response disappeared and was never heard from again.

So... I'm still completely helpless in responding to the kind folks making comments on the blog... for once in my life, I'm _not_ just being an angry old cus, but I'm actually being thwarted by forces I seriously don't understand.

First of all, if the big red clock countdown... 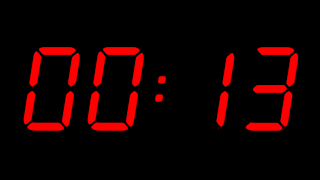 ...is running and the fate of the world depends on my ability to code before Dr. Doom's bomb explodes...


We are all screwed.

My coding ability (zero before taking over GamersArchive.net... though I did putter some with programing in Basic, Fortran, and C back in the day... the day that included punch cards and "tape" (as in: paper on a spool) back up, for you kids out there) has been pretty much monkey see/monkey do since that time.

That is... copy and paste something already there that is similar to what I need to do... then change it until the thing says and does what I actually need from it.

Start from scratch? Ahhh, no.

The indomitable Dave Demko and my son Joe have been there to help translate "modern geek" to "simple monkey" for me. With the expected results and frustration on their part because I couldn't understand (i.e. without clue) what a double-half-twitter-flop is / does / has important effects in / would make what I'm doing so much simpler.

It's not their fault, I really didn't grasp the importance of the double-half-twitter-flop that any fluent Modern Geek would have taken for granted as they did and expected.

Dealing with the levels of ignorance I bring to the table is sometimes kinda eye-opening.

So... then, while I'm comfortably providing a link between man and ape... The Gamers Archive starts to blow up and fail.

Awesome... time to get on line and chat with the tech support guy from the host company on the other side of the world who is, I'm sure, ironically amused at the panicked plight of customers bemoaning their first world problems.

At least I got the "first line of defense" tech guy's attention as he ran through his cards separating the real problem from "Is your modem plugged in?" issues that bore him to tears. He saw it as worthy of pushing up the chain to the higher level of tech support.

Those guys jumped right on it... and told me it was a counter overflow problem. They reset it and didn't even mention the priority need for a double-half-twitter-flop (which would not have helped anything here...I think).

Even better... it worked.

For about a week. Then the site blew up again, with the same error warning (503 for those keeping score at home). Got on the line to the perimeter defense tech guys who passed it up the chain. Again. They, reset the counter... again... and it worked (again).

For about a week.

This process repeated three times. Then, I decided that I needed to get the site set up on a new server... but as clean as possible so whatever was causing this overflow counter to overflow would just stay at the old site.

Their salesman seemed undeterred by the thing I needed. Set up the account and the migration guys will take care of the rest. Sounded good, count me in.

Updated the namesakes at the domain account and then let the migration guys know what I was wanting. I don't really think they understood why I needed a stripped down version of the old server's stuff... they wanted a back up, so I gave them one... their upload system did not allow folders, so I built the thing from the ground up adding files where I could into the nested folders where they existed and so on. Took a while... but within the skill set of monkey see / monkey do.

No, the migration guy said when I told him it was done... he needed a complete Cpanel and a Tar file (all completely out of this monkey's skill set). But the migration guy tossed in the helpful "You can ask the tech guys at the old site to make it for you."

So I did. The guy at the old site first wanted to make it for the whole site... and I got him to understand I just needed it for the actual guts of the site (not the other items there, that could be causing the original overflow problem). They did that.

Then I thought about the sense of lack of understanding I got from the guy at the new host. So, in true "Well, let's see if this works" fashion, I figured out where in the hierarchy the index.html needed to go... don't laugh, that's pretty good work for an ape... and loaded the index there to see what would happen.

Bingo... broken links galore, but the search on the web pinged it and it loaded normally.

At this point the modern geek would have installed the site in a correct folder and fixed up all the links to connect the thing up.

As a link between ape and man, I just dumped the files into the Public folder with that Index thing (technical term). Now all of it (less 1%) was working.

The remaining 1%? A number of links, some dating back to the Clinton administration, were not working...mainly because of capitalization issues.

A call for "playtesters" to wander the site checking for broken links was answered by several guys, most noteworthy being Gary Philips, who found errors in the guts of the site that I had no idea existed. Even to the point of running checks on all the dusty corners in there... finding some pretty strange things.

But... its working now... even without a double-half-twitter-fop or a semi-trained ape that knows what one is.